Home / Autism and Me video transcription 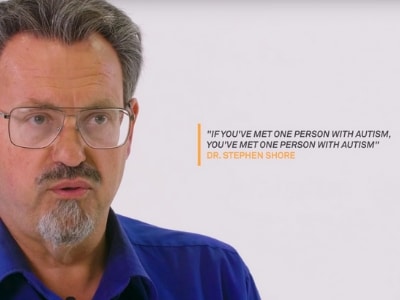 Autism and Me video transcription

I always felt that I was a little bit different. I was eight when I got my official diagnosis. Having the diagnosis helped me to explain to people what my difference was. Both of my sons were diagnosed within a day of each other. I already suspected that they were going to be on the spectrum, so I guess it was a relief in knowing that other people could see it as well and that it wasn’t just me.

I found out the end of fifth grade.

Yeah, it took many, many years to get a diagnosis. With Indi being my only child, I just thought all of her quirks were just her. I didn’t think it was anything else. When she got the diagnosis, we didn’t even know what autism was, so we weren’t actually looking for it. When the psychologist went through the autism traits and Indi’s traits, everything just kind of made sense. It was actually a relief just knowing what to work towards, and how we could help Indi.

Well, I wasn’t diagnosed till I was 44. The effect it basically had was, that for a long time I’d just keep getting into these idiotic arguments and fights. I just couldn’t figure out what was going on.

We’ve only just found out in the last year and a half, that all of our kids have autism. So, it’s very new. Knowing that they have autism now, at least it answers a lot of questions on why they are the way they are. Whereas we just felt they were being naughty, but it wasn’t. They just couldn’t cope.

It’s like there’s a secret set of rules, that nobody’s ever told you about. In a very real sense, it’s like being in a foreign country. You just don’t know the local morals, so end up committing endless faux pas. And people, they’re willing to forgive a couple, but after a while they assume, “Okay, if you keep doing it, you’re doing it deliberately.”

You know, there’s people that think that,” Oh, she has autism.” Then they say, “Does she line things up?” There’s this stereotypical idea of what autism is. But it is a spectrum. There’s some people that are verbal, some that are non-verbal. There’s some that have severe physical impairments. There’s some like Indi, that just has low muscle tone and fine motor skill problems. There’s obviously the social side of it. So yeah, just understanding that just because you’re on the spectrum, doesn’t mean you’re all identical. It’s a very unique journey for everyone.

Autism isn’t always how it’s portrayed in movies. People when they think of autism, they think of kids that are constantly screaming at the top of their lungs. That’s not always how autism looks. There’s actually a lot more bright sides to it. It affects everybody in different ways. Socially, I really struggle. But there’s other things, like my routine, I’m pretty adaptable with that. Whereas my son, who’s also autistic, he’s fine with his friendships. But if his routine gets changed at all, he’ll, yeah, really struggle with that.

We have a lot of therapy, so we’ve got occupational therapists and speech therapists. I also find visuals are very helpful, so we have a lot of visuals around our house. Which help prompting with absolutely everything, from getting dressed to leaving the house and eating food.

So, a lot of pre-planning is required. So packing a bag with some activities and snacks, especially snacks, is important.

We’re on really strict routines. Everything has to be done specific, we use a lot of visual charts. We have a lot to do with Autism SA, and we’ve done quite a few different programs through them. We currently have a support worker as well, which has been really good.

Or, if you feel that your child has autism, speak to your social worker, or your local GP or pediatrician and get it looked into. I wish that we’d looked into it a lot earlier, instead of just thinking it’ll get better.

I just really think, that early intervention is the key. If you feel like your child may have autism, it’s worth having them assessed, so that you can possibly get them the help that they might need. That way, when they start school, you can go into school already knowing that they’re autistic and give the teacher the advice that they might need to help your child.